Indian players will earn US$125,000 (£105,000) each if they win the Men’s World Cup for the host country. Odisha Chief Minister Naveen Patnaik announced the incentive after the opening of the new hockey complex in Rourkela, the city hosting matches alongside Bhubaneswar in the 2023 World Cup.

The 15th edition kicks off next Friday, with Rourkela hosting 20 of the 44 matches at this year’s tournament, the second in a row to be held on Indian soil.

“It will inspire many aspiring players across the country and around the world. The stadium would be Odisha’s greatest gift to the nation,” Patnaik said after the opening of the stadium, which has a capacity of around 21,000.

Patnaik had claimed the international stadium, named after freedom fighter Birsa Munda, as the biggest hockey venue in the world. 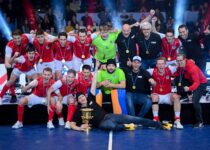