In the first of a two-part series, Brendan’s Creed sat down with Harrod Sport to answer questions about his love of hockey, how the sport could be played more and why it’s important to have a wide range of sports played in schools.

But not everyone will have that inspiration around them, and both players are calling for hockey, and other minority sports, to be encouraged more. As Creed says, “Connect with kids in busy cities and provide more opportunities for communities that have less access to astro space.

Another opportunity is to make international hockey matches games more easily accessible in person and to help increase visibility in this regard.

1. How did you start playing hockey?

2. A Harrod Sport survey found that 78% would be encouraged to play a specific sport if they saw it achieve national success. Did this influence your decision to play hockey?

I don’t think national success was a determining factor in playing hockey. Social media wasn’t as big back then as it is now and men’s hockey in England wasn’t necessarily successful domestically. What I was lucky enough to attend were live tournaments in England which definitely influenced my interest in hockey (Commonwealth Games 2002, EuroHockey 2007; both in Manchester). I loved watching these tournaments live, I worked at one of the tournaments and it was a huge factor in my interest in playing hockey and getting as far as possible.

3. What excites you about hockey right now?

I love sport and what excites me is the future of sport and where it can be taken. We can create a wider connection with the rest of the country and be the next big sport to take over TV slots, making gambling as accessible as possible through online platforms and TV platforms. Rugby was the first of my generation to break through, followed by netball, and I really hope we seize this opportunity to make hockey the next sport to take center stage.

4. What do you think could be done to encourage more people to get involved in hockey?

Connect with kids in busy cities and bring more opportunities to communities that have less access to Astro space. Another possibility is to make international hockey more easily accessible in person and to increase visibility in this regard. I had an amazing opportunity to witness elite hockey on my doorstep and it needs to happen more!

5. How important is it to you that minority sports (those that are not part of the big 5; football, rugby, cricket, badminton and basketball) are televised in order to increase their coverage?

With the generation we belong to, more and more importance is given to television and online viewing platforms (Youtube, twitch, etc.) and therefore minor sports are taking this opportunity to expand their potentially limited audiences. . This needs to be encouraged and aided wherever possible to give other sports the same opportunities the big 5 have had.

6. Do you think that social media has a positive impact on the sport, especially by ensuring the popularity of hockey and encouraging more people to participate in it?

I believe it will. I still believe that much more can be done with hockey on social media and that it takes catching up with rugby, football and basketball to really generate interest on social media.

7. How important do you think it is for children to have the chance to try out a wider range of different sports at school? Please include the reasons for your response.

The beauty of sports is that you can learn things from many different sports and they are transferable to other sports. I had the good fortune to play tennis, hockey, football, rugby, basketball, badminton, table tennis, pop lacrosse, rounder, cricket and squash throughout my childhood and I loved every single one of them. What mattered to me as a kid was fun and the people I met along the way. I loved individual sports, but it was the team sport that I fell in love with. I also loved watching people find their passion in different sports and go further in those sports, seeing each of my friends’ confidence grow as they got better each time they played those sports. 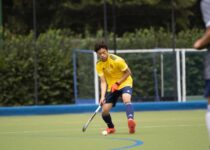